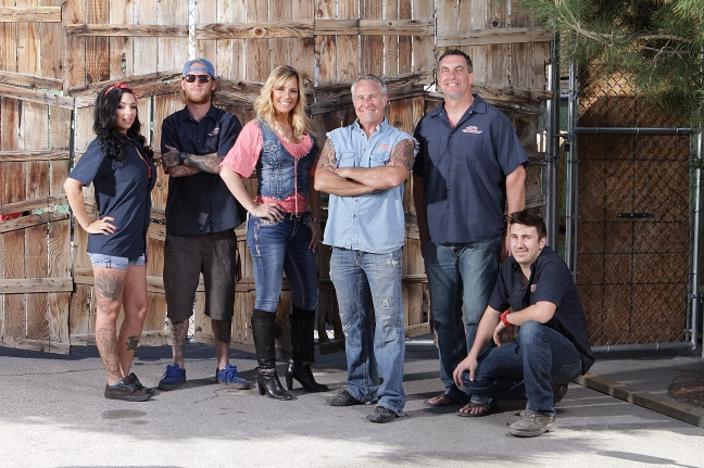 Restoring Memories for Over Thirty Years

If you ask Rick Dale how he got into the restoration business he’ll tell you, “I needed to pay my house payment.” The truth is, Rick has been restoring things all his life. He rebuilt a bicycle when he was only nine years old, and by fifteen he had progressed to motorcycles and cars. “I was always into building stuff,” Rick explains. “I’ve been restoring stuff since I was a kid.” You only have to spend a little time with Rick to see his love for restoration come through. “I love paint,” he says. “I love taking things apart and I love putting things back together.” Rick’s restoration roots grew from his parents’ gas station. “I loved those old pumps,” Rick says, recalling his days as a gas station attendant. “I wore that little hat and uniform” he says. Although it’s a little hard to picture a man in worn blue jeans and a shirt with the sleeves torn off and showing off tattooed arms, even wearing a gas station attendants uniform.

Of course, there is an element of truth in Rick’s comment about needing money to pay his bills. In the early 80’s, Ricks construction business wasn’t doing so well and Rick was struggling to make ends meet. Then he remembered the Rose Bowl Flea Market in Pasadena, California. “At the time, restored Coke machines were becoming a big thing overseas,” says Rick, who just happened to have a Coke machine. He put a little over a thousand dollars into the restoration, took it to the flea market, and easily sold it for three times what he had into it. “It was a cheap buy and an easy restoration,” Rick said. That Coke machine led Rick down a new road. He started buying all the machines he could get his hands on, restoring them, and then delivering them all over the country. “I started running around the country to sell pieces and along the way I started picking,” explains Rick. Which means he’d buy items, like Coke machines, from people he’d meet in his travels. “I’d buy stuff and fill my truck,  stuff that he would then restore and start the whole process over again. Rick did restorations for over ten years starting in 1983. In that time he built a strong, steady business with a base of returning clientele. “The people we did machines for always called us back,” says Rick, who grew his business long before the days of the internet and social media; a time when word of mouth meant more than comments on sites like Yelp or Facebook ever could. Rick took great pride in restoring an object to its original glory. He’d research the piece, learn about it, and then make sure it was restored back to original. In 1993 Rick’s personal life took a turn and he got divorced. That same year he closed his shop, sold it, and bought a horse property with corrals. He turned the corrals into workspaces and began operating the business out of his home. Things were a little tight then. When Rick restored something he often placed that item on the street out in front of his house in hopes of selling it. He slowly built the business again until 2007 when he decided he was done; he was ready to wrap it up and find something new to do. And then he met Kelly-the woman who would steal his heart.

Kelly convinced Rick to keep doing the thing he loved. “You do the work, and I’ll make the money,” Kelly told him. Kelly, who specialize in marketing, helped Rick take the business to new heights. Things were going exceptionally well when Rick was approached by the producers of the television show Pawn Stars and asked if he wanted to pawn a gas tank he had listed in the newspaper. Rick wasn’t interested in pawning a tank he could sell for much more money, but he was interested in something else. He offered to be an expert on the show-the one who tells the Pawn Stars guys what the item is and how much it’s worth. He was brought on the show and soon had episodes revolving around restorations he did for Rick Harrison, owner of Gold and Silver Pawn, the shop portrayed in the show. Before long Rick was offered his own show-American Restoration-and since then he, Kelly and the entire family have been on a bit of a rollercoaster ride. The first thing Rick and Kelly discovered was filming a television show out of a house not designed to film a television show made running the business a little difficult. “The production crew would want us to stop fabricating because they were recording one of us talking and they didn’t want the background noise,” explains Rick. This made it very difficult to keep a delivery schedule for clientele. On top of that, as the show grew in popularity, people began showing up at Rick and Kelly’s house unannounced. “They’d climb over the fence,” Rick says. It soon became apparent to Rick and Kelly that a shop was needed, one that allowed them to both film the show and run their business. That was when they moved to the location on Commerce Street. Now they can run their business, film the television show, and still cater to their fan’s needs. Ricks Restorations is open to the public. The outside of the building is designed to look like a small town. There is a bank, a diner, barber shop and a movie theater-all named after members of the family. Inside is a gift shop and items Rick and his crew have restored that are available for sale. You can find items like gas pumps, gas station lights, Coke coolers, jukeboxes and antique radios. Stepping into Ricks shop is like stepping back in time. “When you come here it’s a history lesson,” says Rick. It’s history you can see if you take one of the tours of the facility, where you find such things as a restored dog-tag machine, a rare Royal Crown soda machine valued at $40,000 and a collection of pedal cars-all of which are available for purchase. You’ll also see the massive sign Rick used to propose to Kelly and the bicycle built for two they rode off into the sunset. On the tour you get to watch the craftsmen plying their trades and even get a sneak peek at some of the items that will be featured on future episodes of the show-such as an old arcade boxing machine. Tours are also available that take you behind the scenes, giving you a view of both the work areas and the “boneyard” where Rick keeps items you can purchase and have restored-like refrigerators, popcorn machines, old arcade games, candy machines and kiddie cars that used to cost a quarter to ride. While Rick’s life has gotten more hectic since the show first aired, having your own show does have its benefits. The production crew tends to find new and interesting things for Rick to restore and he loves it. “People come in and they tell me the story of the piece they want restored,” says Rick. “They tell me how much it meant to them and it really touches me.” This is easy to see by the expression on Rick’s face when he talks about the items he’s restored. And while the show may bring with it a certain amount of pressure, getting to touch these items, hearing the stories, and seeing the looks on people’s faces when the item is restored makes all the work Rick and his crew puts in completely worth it. Another benefit of having a successful show, and your own business, is you can get your family involved and Ricks Restorations is certainly a family affair-one that has made Rick a happy man. Ricks brother Ron is a picker. His wife Kelly, handles the business operations and development, their son Tyler runs the shop and their other son Brettly is both a salesman and a picker. Their daughter Ally is both the office manager and accounts receivable while Michelle, their niece is assistant manager and in charge of merchandise.

While Rick may have gotten into the business because he needed the money, he has walked away with something much more valuable. “Having the gratitude is way more awesome than having the money,” he says. “The people who know the show and watch us love us, and that makes me happy, happy, happy.”